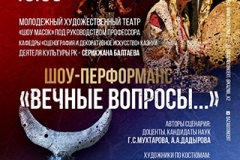 The world is undergoing colossal changes, how we are going to live in the world of robots,

artificial intelligence and digitalization? The issue of digital dependence and gadget addiction, problems of loneliness and alienation in the digital world -is already an existing reality.

The world of images of modern man diverse and contradictory, which is brightly presented in the show program performance, consisting of a prologue and six parts.

Prologue. Begins with an excerpt from a monologue of Hamlet, whose permanent creator

William Shakespeare says sublimely ” What a piece of work is the man!”

characters from famous blockbusters. Sometimes, because of this, it seems that around

there is a dominance of cruelty, evil and absurdity.

The image of a shaman, a kind of mediator between the worlds, performing the ritual and who summoning the spirits, appears in this scene as a symbol of purification and healing from negative influences of dark forces.

Humanity for thousands of years continues to live in an atmosphere of the dichotomy between good and evil. This tells us the storyteller Korkyt-ata. Before the viewer,

the good and the evil, the brave and the cheerful characters of Kazakh mythology, fairy tales, and legends come into sight. The past is the basis for the future, and the bird

Samruk symbolizes the intersection of time and space dimensions.

The world is one, and there are many nations and cultures in it. The beauty of the world is in diversity. Universal and national archetypes form cultural code of humanity, signifying how it is important to preserve the great heritage of our ancestors.

Part 5 «The appearance of the goddess Umai»

Humanity always holds hope for the better. Since ancient times, the image of the goddess

Umai was a sacred secret of the universe, giving salvation and blessings from above. Boy with a globe in hands, appearing after a flap of wings symbolizes the hope to save the planet

and humanity from global problems such as pollution of nature, environmental disasters and other challenges which humanity is currently facing.

How often in the rush and bustle of everyday life we are thinking about eternal questions of the meaning of our being? The question naturally arises, to be or not to be …? The main character makes his choice. He chooses to be.

Happening with the audience: “What would be your choice? dear viewer, you can show this by choosing one of the emojis, laughter – to be, sadness – not to be.”