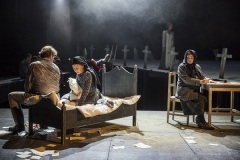 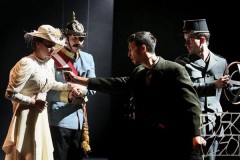 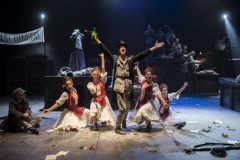 Olexandr Bilozub
Ukrainian scenographer, artist, actor and theater- and filmmaker, Honored Art Worker of Ukraine.
At 1980 Olexandr Bilozub obtained the decorator qulification in Kyiv artistic and industrial college. From 1986 to 1989 he studied at Kyiv national university of culture and arts on Chaikovsky’ faculty of direction and acting skills.
As an art-director worked at Lviv Academic Theatre “Voskresinnya”, Schepkin Drama and Musical Comedy Theatre of Sumy, Chkalov Dram Theatre of Mykolaiv, Kharkiv theatre “Arabesky”, where he worked on the common project with a band “Mertvyi Piven”, I van Franko National Academic Drama Theater, cooperated with the director Andrij Zholdakov in many theatres of Ukraine and Eorope.
He works in the genre of ascetic realism, prefering black-and-white scenography, does not focus on accurate history.
From 2002 till now Olexandr Bilozub works as a production designer with a director Attil Vidnyanskij in the theatres of Hungary. Together with him Olexander created a lot of scenography works.
In 2014 for the “Isten Ostora” scenography he got the prize in the nomination of “The Best Scenography” and “Costumes of the Year” in Hungary.
From 2016 Olexandr Bilozub has been working as a production designer at he Kiev National Theatre of Operetta.