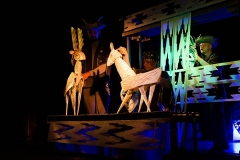 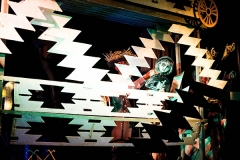 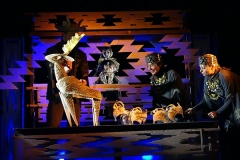 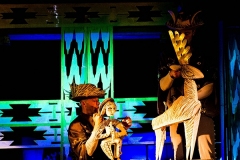 Since 2009 she has been working as the chief artist of the Lviv Academic Regional Puppet Theater. Inessa studied at the Odessa Theater and Art School at the Department of Puppet Theater (1986 – 1990), as well as at the Kyiv National I. K. Karpenko-Kary Theatre, Cinema and Television University, where in 2018 she obtained a bachelor’s degree in scenography of puppet theater, and in 2020 – a master’s degree.
The artist’s creative work includes a number of interesting, original stage works in the theaters of Lviv, Rivne, Uzhhorod, Khmelnytsky, Chernihiv, staged with different directors.
The artist’s portfolio includes such performances as: “Little Mice Mytsyk”, “Colored Milk”, ” Rim-tim-ti” (this play won the Grand Prix at the festival in Poland (Lomza)), “Giraffe and Rhinoceros”, “Painted Fox”, “Horseshoe for Happiness”, “Forest Song”, “About Valebuk,  Princess Nebiysya and Dovhoboroda ” and others.
In recent years, Inessa Kulchytska’s work in collaboration with director Serhiy Bryzhan has acquired a special color. Their performances: “The Cherry Orchard Around the House”, “My Thoughts” by T. Shevchenko and “Golden Horned Deer” by D. Pavlychko.
According to the results of the all-Ukrainian review (season 2016-2017) of puppet theaters from “UNIMA – Ukraine”, Inessa became the winner in nomination “Best Artist” for the play “Golden Deer”, and at the International Festival “East – West”, which took place in Krakow (2018), the same play received a diploma “For Best Scenography”. The performance “Dumy moi dumy” won first place at the All-Ukrainian Festival of Puppet Theaters (Zaporizhzhya), “Cherry Orchard Around the House” – “Best Scenography” (Kyiv). The play “Floating boat of fairy tales flooded” was one of the finalists of the Second All-Ukrainian Theater Festival of the Game Award.