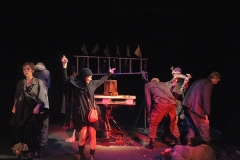 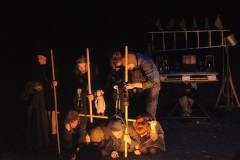 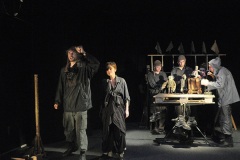 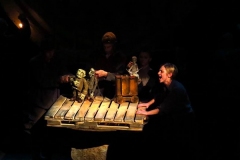 Studied at the Kharkiv Art and Industrial Institute, majoring in “Graphic Design”.
Since 1995 she has been working as the main artist at the Kharkiv State Academic Puppet Theater named after V.A. Afanasyeva.
Over the years, N. Denisova, as a production designer, has created about 50 performances for children and adults.
N. Denisova is distinguished by the improvisational manner of creating performances, and great attention to the smallest details of the stage text.
N. Denisova’s works have repeatedly received the highest awards of prestigious art forums – in particular, the costumes created by her for the performances “Lefty” and “Decameron” won the highest awards at the I and II International festivals of theatrical costume and fashion named after V. Karinskaya.
Her work was celebrated at the annual reviews held by UNIMA-Ukraine, the All-Ukrainian Festival of Puppet Theaters “Season Premiere”, the International Festival of Puppet Theaters “Star Trek”, “Pup.pet” and others.
In recent years, N. Denisova has formed a productive creative duo with director O. Dmitrieva. Their cooperation confirms the significant role of the Kharkiv school of puppets in the modern theatrical process of Ukraine.
Their famous performances are: “Simple Stories of Anton Chekhov”, “King Lear”, “May Night”, “Marriage”, “Cherry Orchard”, “Imaginary Sick”, “Children of Paradise”, “Magic Ring”, “About Princes and princesses “,” Hedgehog from the fog “.