Sound installation Falling(?) transforms the soundscape of the Belgrade Waterfront building site into a statement against a shady government project that used the narratives of progress and development to both simbolically and physically erase parts of Belgrade’s history and collective memory.

We created Falling(?) as a witness of our city’s decay, and we present it to Tbilisi audience in hope that its universal message will be understood: In the modern world we are all deeply connected through facing the same set of issues which may only appear endemic because of the local specificities. 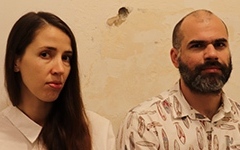 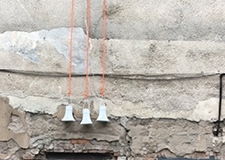 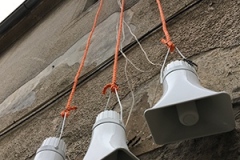 Romana Bošković Živanović
(1981) works in the field of scene design, with the focus of her interests being scene architecture and technology. She exhibited her artworks and presented them in national and international events (BELEF Belgrade Summer Festival, Mikser, INFANT International festival of New and Alternative Theatre, Triennale of Expanded Media, Dubrovnik Summer Festival…). Romana is an architect by education and she is an associate professor at the Scen Department of Arts and Design at the Faculty of Technical Sciences in Novi Sad. She obtained her doctoral degree in Scene design in 2010. She was an active basketball player and a member of pioneer, cadet and junior national teams of Yugoslavia.